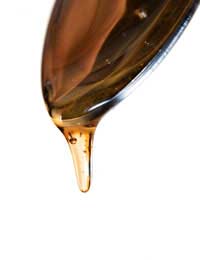 Honey has been valued as a food source since ancient times. Plants take in moisture and many natural nutrients from the soil, which in turn has a bearing on the quality of nectar produced. The liquid released by the nectar contains sucrose, protein salts, acids and enzymes in a watery solution.

Another factor that determines the quality of the nectar is where the plants are located. It is a well known fact that fruit trees produce more fruit on their sunny side. Have you ever wondered why? The reason is remarkably simple. The sunny side of the tree has its water driven off by the sun's heat, which makes the sucrose more concentrated, which in turn makes it more attractive to bees. The bees than make frequent visits, which results in improved pollination.

To convert nectar to honey involves reducing the water content so it is less than 20%. This is to prevent fermentation and is achieved by exposing the liquid to a warm and well ventilated part of the hive. The second stage involves the bee adding the enzyme invertase to the nectar. Invertase is produced by the bee from glands on their body. These stages result in dehydrated nectar being produced. When the honey is sealed in the wax comb it has a clear appearance.

Dijon differs from other mustards and can be easily recognised by its light colour and strong taste. As a result of the huge taste difference between regular yellow mustard and Dijon mustard it is unusual to substitute one for the other.

It's a staggering fact that there are over 750 million olive trees cultivated around the world, with approximately 95% of them being grown in the Mediterranean. In countries which do not produce olive oil it is not always recognised that a fresh olive oil tastes considerably different from older oils. The flavour of the oil is influenced by many factors, including the soil that the tree has grown upon and the time the olive was harvested.

Traditionally olive oil is made by grinding olives, with green olives producing an oil that is relatively bitter to the taste. For this reason, there is great care taken to ensure that olives of the correct ripeness are used to make olive oil. Once the olives have been ground, using large millstones, into a paste mixture and the oil, known as virgin olive oil, is collected from this process, which takes approximately 45 minutes. After all the oil has been collected, the paste is then placed in a press to remove any residue oil from the olives. This second process produces a lower grade oil.

To make a honey and mustard salad dressing you will need:

First take all the ingredients, except the oil, and blend well together. Next add the oil and mix.