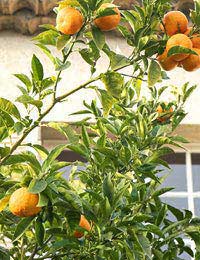 Oranges are a versatile ingredient that can really add something special to salads and dressings.

To make your mandarin Orange Dressing you will need:

First take the can of mandarin oranges and drain the juice from them. This can be retained and added to the dressing if you so desire. Next blend the mandarin oranges, honey, salt, pepper and vinegar in a food processor before gently pouring in the oil until it has blended well. Some of the mandarin juice, retained from the tin, may also be added at this stage. Once this is complete you can either serve immediately or place in your fridge until you are ready to serve.

In addition to being the prime ingredient in dressings, oranges can also be used in salads. One such example is the orange vinaigrette chicken salad. To make this delicious and healthy salad, that can be made in approximately 45 minutes, you will need:

First take a bowl and mix together the vinegar, salt, sugar, orange juice and olive oil. It is important to retain approximately 1/4 of a cup of this dressing for use in basting the chicken later. Next, after lightly oiling the grate of the grill, place the chicken breasts under a medium heat grill, cooking for between 7-10 minutes on each side. Make sure that during the grilling you base the chicken using the retained dressing from earlier.

After the chicken has been well cooked, set it aside to cool down. When cool you can cut the chicken breasts into strips. Next take a bowl and mix the oranges, broccoli, lettuce and carrots together before topping off with the strips of chicken and dressing.

Another salad with an orange theme is a pear and mandarin orange salad. This can also be prepared in approximately 45 minutes.To make this salad you will need:

To make the dressing to go with your pear and mandarin orange salad you will need:

To make your pear and mandarin orange salad you should first take a large bowl and mix the onion, lettuce, pear and orange. To make the dressing to go with your salad you should use a bowl to mix the honey, olive oil, mustard, vinegar and pecans. When this has been completed, pour the dressing over the salad and either serve immediately or place in the fridge until ready to serve.