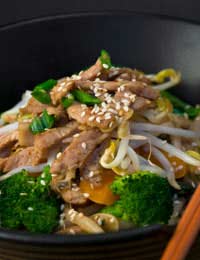 Sesame pork and noodle salad is a great dish for serving those who think salads consist only of ingredients such as lettuce, tomato and cucumber. The twist on the traditional salad will hopefully persuade those that think of salads as boring to think again and give them a try.

To make your sesame pork and noodle salad, for 2 servings, you will need:

How to Make Your Sesame Pork and Noodle Salad

Once you have collected all the ingredients you should first remove as much fat as possible from the pork before slicing the meat into sections of about 2 inches in thickness. Next you take the pork and slice it again into thin strips.

Once you have dealt with the meat you can turn your attention to the garlic, ginger, sesame oil, soy sauce, vinegar and sherry. Place all these in a large bowl before adding in the pork, which should then be mixed until it is coated with the other ingredients already in the bowl. It is important to do this part of the preparation first, as it gives ample opportunity for the pork to marinate as you carry on with the other stages of the salad's preparation.

Next, take a large bowl and place the egg noodles inside. After you have done this add boiling water, ensuring that the water completely covers the noodles. You should then leave the noodles to soak in the boiling water for approximately 7 minutes. By this time the noodles should have become tender, but it is best to always confirm this yourself. Once the noodles are tender remove from the water, and remove all excess water from the noodles, before placing the noodles in the bowl and adding the spring onions, bean sprouts, carrot and red pepper.

Next, take the frying pan and increase the heat slightly before adding the pork to the sunflower oil already in the frying pan. The pork should then be stir fried, in its marinade, for approximately 7 to 9 minutes. A good indication of when the pork is cooked enough is when it loses its pink appearance.

Once the meat has been cooked, add it to the vegetable and noodle mixture, ensuring that it is stirred well as you add it. Once you have served the salad top it off with some sesame seeds.