Duck Salad With Mushrooms and Oranges 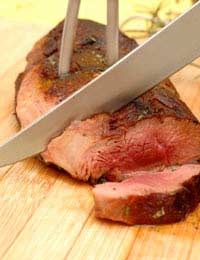 Not the quickest salad to cook and prepare, the wait for this mouth watering dish is well worth it. The recipe below is for 4 people and will usually take between an hour and an hour and a half to complete.

Using a covered saucepan bring the rice,with one cup of water, to the boil. Once bought to the boil simmer for approximately 20 minutes until the rice has become tender and the water has been absorbed. Once this has happened you should then take the contents and place in a larger bowl.

Use two teaspoons of the vegetable oil to brush the duck breasts on both sides,then cook the breast, using a pre heated ridged grill pan, for around 3 or 4 minutes on each side, although the amount of cooking needed for the duck breasts is dependant on your preference. If you do not happen to have use of a ridged grill, a grill will suffice with the grill set on medium heat.

Once cooking is complete take the duck breasts and leave to cool on a board.

Afterwards use half of the remaining vegetable oil to brush the pan before adding half of the mushrooms and cooking for approximately 4 minutes, turning them until they are tender. This exercise is then repeated using the balance of the oil and mushrooms.

Using one of the oranges, grate half a teaspoon of zest and put this to one side to be used later for the dressing. Take the three oranges and remove all trace of peel and pith before cutting between the membranes and removing the segments. At this point in the salad preparation make sure you hold the oranges over a bowl in order to catch any juice that may leak from the fruit.

Remove, and put to one side, one tablespoon of this juice as this, along with the zest removed earlier, will be used for the dressing.

Next, take the pomegranate and, after cutting in half, remove all the seeds. Take half of the seeds and, along with the segments of orange, mushrooms, salad leaves and water chestnuts, add to the rice before placing strips of duck on top of the salad. It is also possible, if you prefer, to use pineapple in place of orange.

Removing the seeds from a pomegranate can be a messy business. One way of minimising any mess is to cut the pomegranate in half and, using a bowl big enough for you to comfortably place your hands in, remove the seeds underwater with the help of the bowl. Remove any bits of membrane from the top of the water and then drain the water through a colander in order that you can remove the seeds.

The dressing to go with the duck salad is made using the earlier saved orange juice and zest, along with mustard, ginger, honey and walnut oil that is then blended together before being poured over the salad.