How to Cook Traditional British Food 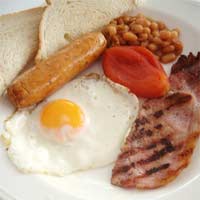 Traditional British cookery has a diverse mixture of influences from the different European cultures with which they have long shared history. Most significant of these is French cuisine. A great many of the words used in English to describe cooking and kitchens are of French origin, including of course, chef and cuisine.

This linguistic obeisance dates from the 11th Century Norman Conquest which saw French nobles appointed to rule over much of England. This long-term occupation is responsible for the fact that the English words to describe livestock animals; ‘cows’, ‘sheep’ and ‘pigs’, have Anglo-Saxon origins whereas the words for the same animals as meat; ‘beef’, ‘mutton’ and ‘pork’, are directly derived from the French ‘boeuf’, ‘mouton’ and ‘porc.’

Rationing and scarcity drastically limited the range and quantity of ingredients available and it took British cuisine many years to recover and develop beyond the staple formula of meat and two vegetables. As a result, British cuisine had a poor reputation for a long time, even inside the United Kingdom.

Recent decades have however seen the steady growth of renewed interest in line with the development of a unique British culinary consciousness. The lingering inferiority complex has been cast aside and dishes such as rabbit pie, lamb hotpot and beef pottage have been given a new lease of life by many high profile chefs.

The best reason to get and understanding of traditional British cuisine is that it offers recipes that take advantage of seasonal and local produce. The potatoes, cabbage and beef on sale at the local farmers’ market can be made into divine bubble and squeak. Such hearty comfort food goes a long way to helping both mind and body cope with a cold, wet climate and has been at the forefront of traditional British food’s resurgence in popularity.

Every possible permutation of bangers, mash and gravy will eventually be explored and the results of many of these ongoing experiments can be found on the menus of pubs and restaurants around the country, some more successful than others.

Within the United Kingdom there is also significant regional variation. Cawl is a Welsh mutton dish that can be a deliciously thick broth or a rich and chunky stew depending on how it is made.

Cullen Skink is a Scottish soup made with smoked haddock, potato and onion that can be found being served in local cafes as well as some of the world’s best hotels.

Haggis is an example of traditional peasant cuisine where scarcity increases the pressure to make use of every possible part of each carcass. Having suffered from domestic diners’ squeamishness for a long time it is now being recognised internationally as a distinctive and authentic contribution to the tables of the world.

Another signature feature of the British diet is the massive fried breakfasts that can be found at almost every pub, cafe or restaurant open early in the day. This tradition harks back to the dawn of the industrial era when it was not unusual for working men to need several thousand calories to give them the energy for long hours of gruelling manual labour before lunch.

Common ingredients for these ‘full breakfasts’ include:

Traditional British food does not deserve to be ignored or derided. There is a wealth of tasty and authentic recipes available to make the most of local produce and, though many of these recipes lack the attractive presentations that are found in other cuisines, there is usually a good reason why previous generations of Britons settled on these dishes as staple favourites. Insubstantial but pretty food is not nearly so attractive when you are soaked to the skin and freezing cold.