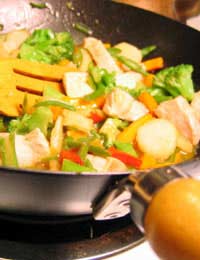 Oriental chicken salad is a delicious and healthy salad that can be made in less than an 1 hour.

To serve 2 you will need:

Variations to the Oriental Chicken Salad

A variation on the Oriental chicken salad is to use chilli pepper, lime juice, figs, mint and red capsicum(sweet pepper). This will take between approximately 1 hour and 1 hour and 15 minutes to prepare.

To serve 2 you will need:

First take a large bowl and mix together the honey, lime juice, ginger, soy sauce and chilli. Once well mixed add the onions, figs, chicken and mint, ensuring that everything receives a good coating. After completing this cover the bowl and place in the fridge for approximately 1 hour. During this hour occasionally gently mix the ingredients. When you are ready to eat your Oriental chicken salad add the pepper, cucumber and melon and mix well together. Then take the salad leaves, placing them on the individual plates, and add the chicken mixture.