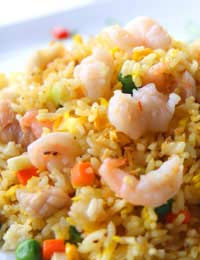 Oriental rice salad with mixed peppers and prawns is a delicious crunchy salad that can be prepared quick and easily. How about oriental matchstick and prawn salad matchsticks with rice paper wraps.

To serve 2 people you will require:

The salad dressing is made from:

To make your Oriental rice salad with mixed peppers and prawns first combine all the dressing ingredients in a salad bowl and then add to it all the other ingredients and ensure that they are coated in the dressing.

To serve 2 people you will require:

To make your Oriental matchstick and prawn salad with rice paper wraps first chop the prawns, making sure you hand squeeze any excess liquid out with your hands, then chop approximately 1/3 of your already prepared chilli and ginger before placing the chilli,ginger and prawns in a bowl along with the soy sauce, coriander and dash of lime juice. Ensure that all the ingredients are mixed well in the bowl.